I toast to the Romans who planted vineyards here over 2000 years ago!

The Alella designation of origin is a recognition of our wines, from vineyards spread over 28 towns in the counties of Maresme, Vallès Oriental and Barcelonès. The best-known ones are the white wines, made with a variety native to the territory called raisin white.
And, in September, we have the Grape Harvest Festival. Check out the program: you can squash grapes with your feet, which is a lot of fun!

Phylloxera almost wiped out Alella’s vineyards, but do you know what it is? A fungus, an insect or a very strong frost?

The Consortium for the Promotion of Wine Tourism of the DO Alella territory will give you information on visiting vineyards and wineries, see how wine is made, etc.

The heart of Alella DO (Designation of Origin)

In the 19th century Alella began a progressive expansion of the vineyard, increasing in more than 40 hectares over the area cultivated in the previous century to reach in 1851 75% of total crops.

But this growing trend was interrupted in 1883 by the arrival of the phylloxera plague: a small insect that sucks the juice out of the roots of the vine, killing them in a short period of time. This plague advanced unstoppably from France since 1879, leaving many families in misery. As if the misfortune wasn´t enough, a strong frost in 1891 killed many orange and carob trees.

The phylloxera also implied profound social changes: annulments of contracts, evicted rabassaires (non-owner winegrowers) by land owners who wanted to recover their land taking advantage of the circumstances … Many families from Alella were forced to sell their properties: Cabús, Arenas, Jonch, Sanmiquel, Serra, Pujades, Coll, Monnar, Casals or Gurri are a good example of some of the estates that had to close. However, wealthy families from Barcelona, such as the Marquis of Alella, the well-known paper manufacturers Guarro, the Borrells or the Möllers, took the advantage to buy some of them.

The arrival of a new American strain, which was immune to the deadly insect, was the salvation: grafting the stems of this new vine with the native was the solution to fight the plague successfully. A massive repopulation of some 80,000 vines was carried out. 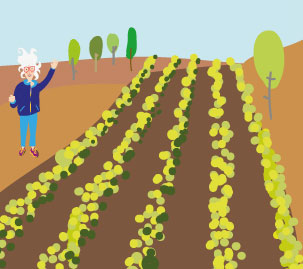 We have plenty of friends, right Picotet?

It was the garden of the Bell Resguard farm, the summer house of the first Marquis of El Masnou.
It’s huge! In addition to vegetation from here and around the world, it has a pond with an island in the middle, a bridge, a lookout, a waterfall…

Find the cave with the waterfall and draw the one you would like to find inside.

The inhabitants of El Masnou are called masnovins and have a very curious nickname: hunchbacks. Find out why.

People from Masnou are hunchbacks

A hump is an abnormal bony prominence of the spine. Why are people from Masnou popularly called hunchbacks?

In most of the houses built in that city in the 19th century there was an interior staircase or, in others, a staircase to access from the ground floor to the upper floors. At the beginning of the handrail, there were two big ball knobs as ornaments, more or less luxurious depending on the house, some made of coloured and others of transparent glass. There were also porcelain knobs decorated with different floral motifs, and others cut into noble wood following a style basically derived from the prerophaelism and symbolism, characterized by the predominance of the curve over the straight line and the frequent use of plant motifs.

When men, mostly sailors, fishermen or shipyard workers arrived at home, they used to hang their jackets or tabards on these knobs by the stairs. Due to their jobs, the jackets were usually wet, so by hanging them they got out of shape. When they put them back on, the shape of a large hump was left on their backs so it made them look as if they had a hunchback.

Hey, I’m very much a sailor, like everyone else in the Maresme! And you?

Come to the museum and discover the history, trades, nautical objects, boat models, pieces of the archaeological sites of the town, etc.

Imagine you are the captain of a ship and take a picture in the replica of its cabin.

The boat or sailor’s biscuits are a typical product of the village of El Masnou. They served as food for the crew that travelled to America in the 19th century. They were then square and, what a delight pecking at their crumbs!

Take a trip back in time and let your imagination run wild: you will see how the Romans cultivated, produced and sold the wine in this winery.

There are reconstructions of wine presses, identical to the ones of 2000 years ago!, must tanks, ceramic vats to ferment the wine…

Find the lead seal used by the person in charge of the cellar in the 2nd century A.D.

“Torcularia, laci, dolia defossa, signaculum…” These are words in Latin, the language of the Romans, which you will see written in the museum and which sound very strange, right? Come up with a truly Roman one!