Would you like to climb the summit of the Corredor mountain range?

It’s 632 m high and it’s such a beautiful place, that they built this sanctuary a long time ago for the Virgin Mary of Help.

Don’t take your boots off yet, as there are many other routes leaving from here. Discover them!

On stormy days, legend has it that you hear the galloping of horses and the screams of a woman. Find out about the story that explains it.

Legend of the Castle of the Lord of Montnegre

There is a legend that says that a long time ago at the top of the mountain there was the Castle of the Lord of Montnegre.
This feudal lord was very fond of hunting, but when he went out hunting, he heartlessly liked to hurt people, so he left a bad name wherever he went.

On the main day of the Òrrius Festival, he made an appearance into the dance hall accompanied by the whole hunting party. Music and dance stopped straight away, and people fled to hide wherever they could. The gentleman’s eyes fixed on a woman of great beauty, who was not fast enough to hide, so he kidnapped her, taking her up with his iron hands and putting her on his horse.
The poor woman shouted out to her husband, but the noise of the parade and the dogs drowned out her voice.

When the husband came out from hiding and couldn’t find his wife, he soon realized what had happened. Immediately he ran to the forest in pursuit of the troops taking advantage of paths and shortcuts that he knew as a good peasant. He finally arrived at Montnegre Castle just as the unbridled cavalcade was entering but the drawbridge lifted in front of him so he did not make it in.

But just at that very moment a sudden storm like no other broke. Nonetheless, this did not frighten the kidnappers, who were beginning to celebrate inside that they had secured the wife, while the desolated husband desperately started to realise that his efforts to save his wife were being useless. Suddenly, a lightning struck the fortress, turning it into a great bonfire. When the flames reached the wall, they melted the chains of the drawbridge causing it to fall. The peasant was able to enter, but the flames had turned the castle into a great brazier and the poor man found no one alive.

Legend has it that on stormy days the gallop of the lord’s horse and the cries of the abducted woman are still heard. Once the castle was destroyed, a monastery was built in memory of the sorrows suffered by the many victims of the evil feudal lord.

Don’t laugh, no, in the past we used to need ice for food as well. And this curious construction was a warehouse where the pieces of ice that were made in winter on a nearby raft were piled up. And it was kept with fern leaves until the summer, which was when it was sold.

At the Medieval Forest Fair in Canyamars in October, come and enjoy a lot of activities!

Strolling through its forests and trails, you will see rocks of all kinds: natural or neolithic, with incredible shapes, with mysterious holes, but all fascinating!

Find the one made by our ancestors: dolmens, crosses and signs, cave paintings…

Choose the rock you like the most to take a picture as a primitive family.

Argentona is full of water…. If you don’t believe it, follow me: we’ll do route of the springs!

This is a 50-minute circular walk where you can drink from many springs: the Picando spring (where the route begins) and others like it, the Middle spring, the spring of the Esquirolet, the Iron spring…

Did you ever a from a jar? It’s so much fun and sustainable! It is drunk straight from the jar and the water is always fresh.

It is an invention from many years ago and can take many forms. Check it out at the Jar Museum! We have everything from the Bronze Age to contemporary art and clay classics.

The 4th of August is the raising of jars. Come and try to lift one of 100 kg!

Do you know what sows are? Discover one of my favorite birds on the Pastime page.

This museum is unique in the world in its specialty, although in Spain we can find another two collections of private jars open to the public: the Museum of Botijo de Villena (Alicante) and Toral de los Guzmanes (León).

The origin of pieces is very diverse, but mainly come from Catalonia and Spain, although in recent years numerous pieces from other countries have joined in, such as Portugal, France, Italy, Morocco, Mexico and Peru, among many others. 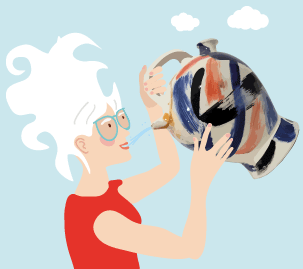 The inhabitants of Argentona are also called repicatruges.

Legend has it that Juliana was the protagonist of an event that originated the bad name by which the Argentonians are known for:

On that day, ecclesiastical and civil authorities met with a large flock of parishioners at the church square for the arrival of the Bishop who was coming from the neighbouring city of Mataró to make a Pastoral visit to the parish. In order to know the very moment, the bishop was entering the town, it had been agreed with the bellman that after he saw the dust of the carriage, a sign of the arrival of an illustrious personality, he would start tolling the bells. And so, it was done, when the bellman saw the cloud of dust that the vehicle raised passing at more or less the height of the chapel of the Holy Christ, hanged on the strings of the bells, and started to toll them.

The authorities and neighbours headed towards Cap de Creus to pay tribute to the prelate, but … oh what a misfortune and surprise! It turned out to be a carriage carrying a pair of sows on its way to the Granollers market! 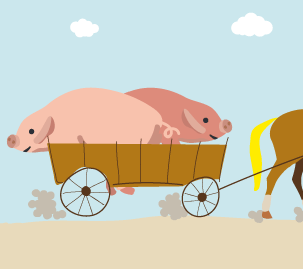 The views from here are spectacular. Right Picotet?

This summit was an unbeatable surveillance point for a good part of the region, which both Iberians and medieval knights used as a place of surveillance.

What you will see are the remains of the medieval castle (fortress and dwelling of the feudal lord): the homage tower, weapon court, the chapel; rooms, cisterns to store water, storehouse, paintings…

The Burriac mountain, with the ancient castle’s rubble on its summit, defines the unmistakable landscape of the village of Cabrera, together with Montcabrer Castle. Its height (401 m) and location make it an unbeatable point of surveillance and control over the extensive territory of the valley of Cabrera and a good part of the Maresme region, as well as over the Argentona stream and Parpers mountain pass, an important means of communication between the coast and the inland region. For this reason, the Iberians and later the Romans used its summit as a place of surveillance.

The tower and the walls that we find today are the remains of the medieval castle, originally known by the name of San Vicente and later by Burriac. It is a magnificent example of a rock castle, that is, directly incorporates natural rock outcrops into its defences to such an extent that the rock formations define the structure of the castle.

The Lord of Burriac Castle, Pere Joan Ferrer, never got used to living there, as he preferred the comforts of Vilassar Castle, which was more important and located within the town walls. In the absence of the lord, it was the so-called “castlà” who lived in the castle and administered it under his name. But in the 15th century the lord of the castle decided to settle down there and remodelled it; he expanded it and gave it a more residential use opening windows and making the rooms more diaphanous.

Inside the castle we can distinguish different areas, according to their function:

In the lands of the Can Modolell farmhouse, remains of what could be a temple dedicated to the Persian god Mitra from the 1st century AD have been discovered, But also Iberian ceramics, Roman remains, medieval burials…

Come and take part in the Laietania Festival, when the municipalities of the region schedule guided and dramatized tours to learn more about all these ancestors. Will you join me?

Do you know who god Mitra was?

Archaeological site of Can Modolell

Can Modolell, the old Can Lledó, is a farmhouse located in the north of Cabrera, on the road to Can Segarra. In its land, very close to the farmhouse, were discovered remains sites ranging from the Iberian period to the late Middle Ages. The most important remains of the complex are, however, the structures of what could have been a pagan temple dedicated to the Persian god Mitra. Precisely, dating from the second half of the 1st century AD, one arul (altar) dedicated to Kaut provides the oldest date for a Mithraic cult remains within the Iberian Peninsula.

The oldest findings of the complex consist of residual ceramics (4th century BC) belonging to the Iberian period. From there, a first construction phase is established that would go from 50 BC to the time of Augustus. The second would correspond to the time of Claudius, the third to the Lower Empire (late 2nd century or early 3rd century) and the fourth to the Late Ancient phase (late 5th century or very early 6th century). In the end, a Medieval phase is established with three cist burial grounds. Finally, we find a set of fifteen graves dated from the XII century, as well as walls that could belong to the temple of San Juan.

Since part of the site has yet to be excavated, there is still discussion about what its function might have been. At first, it was thought to have been a Roman villa, although this opened up to the possibility of a pagan temple. With the successive findings of elements of worship, especially of the solar god Mithra, it was gradually believed to be a sanctuary dedicated to this god. The last excavations carried out in 2011 seem to rule out the association with a villa. It seems clear that the shrine was not only dedicated to Mithra, since other divinities have also been found, perhaps related to him or independent ones: Neptune, perhaps a Silvanus and a goddess from the Roman Pantheon. The Christian assimilation of this pagan sanctuary with the cult of St. John is highly probable, although it has not been proven. The cult to the sun, Mitra, would have been later covered up by the invocation to the saint of the summer solstice and the celebration of the fire: San Juan (Saint John´s eve).

It dates from the 16th-17th century and has the usual three-body structure from the Gothic, Renaissance and Neoclassical architectural elements. The farmhouse belonged to Lladó since the 16th century but is currently owned by the Modolell family. It seems that in the 11th century the farmhouse was called San Juan because in front of it there is a rubble that could belong to the church dedicated to Saint John the Baptist.