Take a good look at them, because some are decorated with mosaics.

Mataró was a city of the Roman Empire. Outside its walls was this Roman villa (from the end of the 1st century BC), declared Cultural Property of National Interest, which you can visit on Saturday.

Help me to remember: how was Mataró called in Roman times? Paint the mosaic on the pastime page and discover it.

The discovery of this Roman town in the neighbourhood of Plan d´En Boet in 1961 by Marià Ribas and her team of collaborators marks a significant milestone in the history of 20th century Catalan and Mataronine archaeology.

It is one of the most important archaeological sites in the country and is named after the 17th century fortified manor house built around a 16th century defence tower: Mas Llauder or Mas de la Torre Llauder.

In 1964 it was declared a Historic-Artistic Monument of National Interest. In 1965 the Town Hall acquired the land, protected the area and in 1970 demolished the Llauder farmhouse and its tower.

The archaeological remains were abandoned for a long time and suffered plundering and degradation until the Archaeological Section of the Museum of Mataró led a movement to raise public awareness in 1972, which ended with the construction of a retaining wall at the site.
After the excavations and restoration of the mosaics, the site was opened to the public in 1988.

It was supposed to be a big textile colony, but it wasn’t finished. A few bathrooms and this nave remain. It was meant for bleaching cotton.

Go in and look at the arches, you’ve probably seen it in other Gaudí buildings, right? Here, Gaudí practiced his famous parabolic arch to erect buildings, and thus did not have to use columns or walls. And this is where he did his tests.

It currently houses the Museum of Contemporary Art in Mataró, the Col·lecció Bassat.

This is the first building built by Antoni Gaudí.

It is the first building built by Antoni Gaudí that was not promoted neither by the bourgeoisie nor by the church but by one of the first textile workers’ cooperatives: “La Obrera Mataronense”.

His friend Salvador Pagès, one of the most outstanding leaders of the cooperative movement in Catalonia, commissioned him to carry out this project, which consisted of a workers’ colony with factories, single-family houses, school, library, casino and social headquarters.

Only a small part of this complex, designed together with the architect Emili Cabanyes from Mataró, was actually built: two dwellings (for the director and the doorman), some toilets and a warehouse used for bleaching cotton (1883); only the last two have been preserved.

It is considered a key project that opened the way to the most genuine Gaudinian creation: the development of arches as supporting elements, a formula that he later used to project the attic of La Pedrera or the infamous stereo-funicular model of the church at Colonia Güell. The use of parabolic arches allowed Gaudí to cover a diaphanous surface of almost 600 square metres without having to resort to columns or walls, whereas the use of wood allowed him to articulate small sections to form slender and resistant arches.
The building was declared a historical monument by the Spanish government in 1969 and a Cultural Asset of National Interest by the Government of Catalonia in 1982.

In 2002, within the framework of the International Gaudí Year (which commemorated the 150th anniversary of the birth of the architect), the Mataró Town Council refurbished the bleaching warehouse under the direction of the architect Manuel Brullet.

Since November 2010 is the headquarters of the Bassat Collection in Mataró.

In Mataró, Modernism is equivalent to Josep Puig i Cadafalch, the architect of the main modernist buildings. Joaquim Coll y Regàs, a textile businessman, commissioned him to design his house (1898), now a symbol of the city.

Observe the details of the facade and come in: every weekend there are family activities.

If you have the eye sight of an eagle my friend, you will be able to decipher what the crosses above the balcony say. 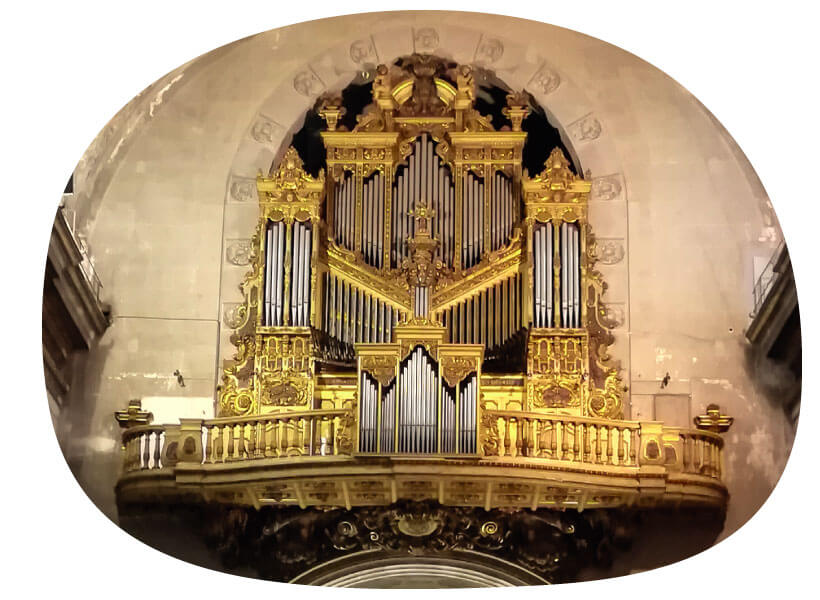 It is one of the most important monuments of the Catalan Baroque and one of the oldest buildings in Mataró.

Walk through the main nave and side chapels and don’t forget to look up to see domes, stained glass windows, paintings…

Find the organ and have your picture taken as evidence.

Get ready, we’re going to Can Marfà!

This old factory used to make knitwear, like the t-shirt you´re wearing now, you know. And therefore there is a museum dedicated to the knitwear industry, the most important and determining industrial activity in the history of Mataró.

Learn about the past, present and future of knitting by looking at machines, advertising, tools, clothing, documents, photos and audiovisuals.

They are super tall and dance around, accompanied by the Nans (18 capgrossos (big festival heads), dedicated to frighten people, watch out! and as for the remaining characters you´ll find around town are: the Àliga, the Drac, the Dragalió, the Momerota, the Momerota and the Diablesses.

During Les Santes (local festival) and Saint George’s Day and other days you’ll be able to meet the giants of Mataró and their friends in the street.

On the left hand side, Robafaves carries a scroll. Find out what’s written.

The giants of Mataró

The giants of Mataró have been known since the seventeenth century and they are:

Apart from the Robafaves family and the dwarfs that accompany them, Mataró boasts several troupes: the Eagles, the Dragons and Dragalios, Momerota and Momeroteta and the Diablesses; as well as Castellers of Mataró (Human towers), Capgrossos de Mataró (carnival figures with oversized heads).

The legend of Robafaves de Mataró (The Bean Thief from Mataró)

Once, the giants of Mataró went to dance in Argentona. And when the party was over, they returned home, and the carriers saw some beautiful green beans in a field close to the road. They couldn’t resist the temptation and threw themselves into the field to steal a good amount of beans, which they hid under the giant’s skirt. At the entrance of Mataró, a group of children surrounded the giants and asked them to dance. They resisted to do so because of the beans they were carrying under their skirts. Finally, an authority servant obliged them to perform and dance and, while they were doing it, shaking their bodies, the beans started falling to the ground. They were discovered and, since then, the poor giant, who wasn’t to blame for anything, was left with the bad name of Robafaves (The Bean Thief).