My lacemaking friends love picking at me, don’t they?
Hey! Don´t be silly. To send someone packing is a whole other story!

It’s like a mesh of threads that makes very nice patterns. They were used to decorate the borders of dresses, sleeves, necks, curtains, handkerchiefs… If you wish to know more, please visit the Museu Marès de la Punta in Arenys de Mar.

The sculpture “L’Àngel de la Puntaire” is a tribute to this ancient tradition of making bobbin lace.

Come on June 24 and do double:

When you meet lace makers you can take a unique sound treasure with you: a very characteristic noise. Do you know which one?

The name of the cherries comes from the Roca brothers: at the end of the 19th century, working as miners in the Pyrenees, they tasted some cherries that they liked so much that they took them to their village, Arenys de Munt.

Since then, my granny and I got full on them throughout the month of June.

If you love animals like me you should´t miss this collection of birds and mammals typical of our Mediterranean landscapes.

There are also more than 150 nests and 1500 eggs of different species.

Discover one of my favorite birds on the pastime page. Do you know what it’s called?

In Roman times it was a villa (domus). Much later, the farmhouse was fortified to combat pirate attacks with very high towers.

At the end of the 19th century, the owner Ramon de Montaner i Vila commissioned the modernist architect Lluís Domènech i Montaner to restore and extend the building. The best artists of the time introduced stained glass windows, marble, carved wood, ceramics, wrought iron and sculptures and gave a look that earned this reputation: Santa Florentina Castle.

There they shot a famous series and turned the castle into the Tarly family fortress. Do you know what series we’re talking about?

The Domus of Canet appears documented as early as the eleventh century since the Castle of Santa Florentina was built on an ancient Roman villa (“domus”), which was an urban centre and an area of wine production.

In the eleventh century the building became a fortified farmhouse to combat the pirate incursions of the time and it is still present today in the architectural ensemble of the castle.

In the 16th century the surname “de Montaner” was added, a lineage that still exists today.

At the end of the 19th century, Ramón de Montaner y Vila, owner of the Domus and an important businessman of Barcelona’s publishing sector (Montaner i Simón Publishing House, today the headquarters of the Antoni Tàpies Foundation), commissioned his nephew, the architect from the Catalan Modernism Lluís Domènech i Montaner, to restore the Domus and expand it. He designed one by one the 3,000 m2 of living space in Santa Florentina and together with his team of the best artists of the time, he introduced colourful stained-glass windows with religious symbols, large marble weights with coffered floors, wood cut into the ceilings, stained glass windows, ceramics, wrought iron and sculptures that harmonise a balanced space full of colour, light, forms and volumes.

The final project turned this building into a residence-palace with the typical medieval and romantic touches of a castle in harmony with an aesthetic and creative modernist style. Due to this renovation inspired by medieval, modernist and neo-gothic elements it was renamed as Castle of Santa Florentina. 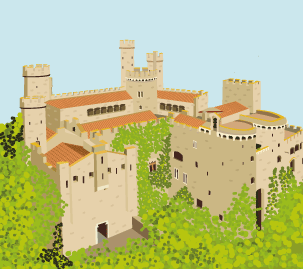 It is a modernist style house that includes the Rocosa country house (17th century), where the architect Lluís Domènech i Montaner and his wife, Maria Roura, spent long periods of time, and the Domènech house, which they built in 1919 when the farmhouse became too small, as they had eight children.

Note that the two sides of the building are different!

In the museum you can see the scale models of the most important buildings he designed: the Palau de la Música Catalana, the Hospital de Sant Pau…

Make a selfie with Mr. Domènech, who will welcome you inside the Casa Museu.

Canet de Mar is known as the cradle of modernism.

Modernism is a cultural movement that took place in Europe around the end of the 19th and the beginning of the 20th century. Although this cultural movement of searching for new forms and expressions affected all expressions of art and thought, it was in architecture and the plastic arts where it is shown with full force.

In Catalonia, Modernism adopted a special dimension and personality which can be found in very different types of buildings of the whole Catalan geography: factories, agricultural cooperatives, athenaeums, markets and houses.

The historical moment was ideal, due to the economic growth and national reaffirmation of the territory. Agriculture was focused on exports (wine, nuts), and there was an important industrial development, of the textile sector in particular. Trade and finance were flourishing in large cities, especially Barcelona, where the Medieval City Walls had become too small and an urban growth and expansion plan had begun.

This situation in Catalonia contrasts with a particularly pessimistic moment in Spain, where the loss of the last American colonies puts Spain in crisis and manifests the stagnation of its state structures and the lack of modernity of Spanish economy and society.

Modernist architecture in Catalonia meant, on the one hand, the modernisation of construction techniques (use of iron in structures and prefabricated elements), and on the other, the preservation of traditional elements (constructions with exposed brick) connected to the Gothic style with which it has certain parallelism. It is a decorative architecture that integrates all of the fine arts in the building. Architects are often also interior decorators and design all the details: furniture, marquetry, stained glass windows, mosaics, forging, etc. There is a demand for handicrafts at a time of industrial dominance.

The main features that define Modernism are the predominance of the curve over the straight line, asymmetry, dynamism of the forms, a detailed decoration in the search of an aesthetic per se, the frequent use of vegetal and natural motives and the feminine shape. 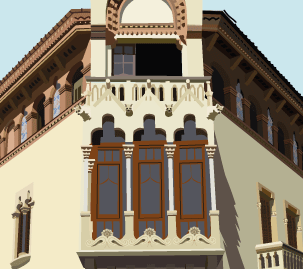 Another beautiful building by the architect Lluís Domènech i Montaner, which is now a library. Go inside!

Other things that you can see: stained-glass window (windows of colours joined by strips of metal) and two iron dragons who guard the Catalan flag.

Hurry up and find the name of this building. A hint: it’s written on the facade!

Stained glass windows are also eaten! Take it easy… It is the name of some sweets (dry pasta type), made by the pastry shops of the municipality. Try them, they´re delicious!

A well-known Indian is José Xifré y Casas, who embarked for Cuba, where he dedicated himself to tanning and farming. But do you know what an Indian is?

When he returned he had the Xifré building built and he donated it so that the people could have a hospital. (it now has municipal services).

The writer Salvador Espriu invented a village based on his art works and named it Sinera. He was inspired by Arenys de Mar where he spent his summer holidays, and which is the home town of his family. One of his best-known books is Sinera Cemetery. Try writing Sinera backwards and see what happens!

To talk about the Catalan Indians you have to look back at history.

The discovery of America opened up a new horizon of conquest, adventure and enrichment during the 16th century in Europe, and especially in Spain. America produced cotton, sugar, coffee, corn, potatoes, tobacco, cocoa, vanilla, various kinds of wood, plants to dye clothes …. and, in exchange, Europe would send finished products, shoes, textiles, etc.

At first, there were only two Spanish ports authorized to trade with America: Seville and Cadiz, but it was in the latter that an important colony of Catalans was established to begin to trade overseas. Later on, the trade ban with was overturn and 13 Spanish ports were authorized to trade with 20 American ports. From the Catalan ports of Barcelona and San Carles de la Ràpita, Palma de Mallorca and Alicante sailed many ships, which were later joined by Vilanova and Geltrú, Sitges, Mataró, Arenys de Mar, Tossa, Palafrugell, Sant Antoni de Calonge and Sant Feliu de Guíxols. They travelled mainly to Cuba, Mexico, Argentina and Venezuela.

Catalan settlements in America proliferated, especially from the end of the 18th century onwards. It was mainly people from the coast, but there were also emigrants from the more inland regions and so the figure of the “Indiano” or “Americano” was created: owners of large coffee plantations, cultivated lands, livestock but above all commercial establishments who made great fortunes and returned to Catalonia improving their economic and social status. In a way to remember the colonial atmosphere which they had lived in and had been so propitious that they built colonial-style houses: towers with porticoed galleries and surrounded by tropical gardens. But they also felt generous with their country and their native fellowmen and built schools and hospitals and invested in different industries and institutions.

Would you like to know what minerals are? What are they good for? Where did they come from?

Well, you are in the right place: one of the most important museums in Catalonia, which began when Joaquim Mollfulleda and Borrell gave his mineral collection to the town.

In the museum you will find a mineral that is used to make the battery of your mobile phone. Do you know what it’s called?

Some minerals have the property of emitting light when exposed to ultraviolet light. Come check it out in the fluorescence room.

This is actually one of the most important monographic scientific museums of Catalonia.

The port of Arenys is a clear example of the seafaring tradition of the town. Fishing and all the industry that is generated in the surroundings of the port are all economic drivers of the town.

If you can, visit it any afternoon Monday through Friday and you’ll see the boats coming in, followed by a lot of seagulls. What do they do there? They also “fish”: the rejected fish that sailors throw into the sea.