Warning, the pirates are coming! How do I know? Because I’m on top of a watchtower.

They were built during the 16th and 17th centuries due to numerous attacks by pirates, who stole and killed to obtain goods, food and valuables.

The towers were used to watch and warn when they saw them coming, and to defend themselves and take refuge.

Find and draw the coat of arms of Can Rates and discover its meaning.

Find the name of all the towers of the town on the pastimes page.

Do you know about Guaita Towers?

They have been known since the Ibero-Roman period, but they were really useful when the Catalan coast defended itself against the numerous pirate attacks during the 15th and 18th centuries.

The Guaita Towers were built in strategic locations and were easily accessible to each other. They served as a watchtower for observation, defence and also as a shelter:

In addition to the Guaita Towers, some other defensive measures were taken, such as fortifying certain buildings (Church of Pineda de Mar, farmhouses …) or building walls (Mataró).

Finally, there were more remote towers (isolated or attached to farmhouses) that also served as surveillance but, above all, as a shelter.  Most of the preserved towers date from the 16th and 17th centuries.

Piracy is as old as trade: pirates were sea thieves, who would rob and kill for goods, which they would then sell to others.  Sometimes they also took people to be sold as slaves or for good-paid ransoms.

The attacks on the Catalan coast date back to the Middle Ages which is confirmed by some of the oldest towers in the area: the Tower of the Enchanted of Caldes d’Estrac, the Castle of Montpalau de Pineda, the Castle of Malgrat or the Castle of Palafolls.

In this early period, the attacks were by the Genoese and the French, but also by the Turks or the Berbers from the Maghreb (hence, they have been popularly known as the “Moorish towers”). There were also employed pirates who were commissioned to steal something for someone else (phenomenon known as “the war of hearts”).

Due to the many towers along the Maresme coast, it was popularly known as the Towered Coast.  Santa Susanna has the most preserved towers in the Maresme:

TOWER OF THE SEA

Of a cylindrical shape, it is the one with the largest diameter and the closest to the seaside.

The train station platforms are located at the foot of the tower, which perfectly illustrates the fusion of modernity and tradition of the city of Santa Susanna.

TOWER OF CAN BONET D’AVALL

A squared floor. From the end of the 15th century and restored in 1805.

Semi-detached to a 17th century manor house. This whole complex, together with its huge swimming pool, several rooms and magnificent gardens are the perfect setting to host different cultural events -such as the Magic Fair- and pictorial exhibitions.

The floor is cylindrical and headless at the top. Located in Bou Street, next to Lola Anglada Square and Colomer Park. It is currently owned by the Pi family.

Are you warm? Take that swimsuit out and let’s soak it! When you go at night, you´ll enjoy a marvellous light show.

Take a picture of yourself fooling around with water.

Built in 1938 during the Spanish Civil War by the Republican Brigades to guard and defend the population from the planes that came to bomb Barcelona.

It was called Montagut de Mar at that time.

Built on October 6, 1938 by the Republican brigades, it is made of reinforced concrete and sits on a stone base. Inside there was a machine gun.

It belonged to a line of defensive elements (more than 50 bunkers) built by the Republican town councils of the Maresme region to guard the territory and defend themselves against the Nationalist planes that flew from Mallorca to bomb Barcelona during the Spanish Civil War (1936-1939).

Santa Susanna, then known as Montagut de Mar, had two fortifications: a larger one strategically located near the stream (now disappeared by the erosion of the sea), and this bunker at Les Dunes Beach.

During the 1940s, the Army kept them as observation posts to defend against a possible Allied invasion (World War II). During the 1950s, they became the homes of immigrant families. Little by little, they were forgotten until 2015, when the bunker was recovered as an historical landmark.

Now it’s time for a Roman one, who lived 2000 years ago around here. They were so smart! They built these bridges, but not for people to pass, but for water. This took it from the stream to the Roman villa of Can Roig, 3.5 km downstream.

This aqueduct was also called the Devil’s Bridge, how scary! The Roman road that reached Rome is where the National Road II is today.

What was the name of this long Roman road?

In Pineda de Mar we find remains of a Roman aqueduct that made use of the slope of Pineda’s stream to transport water from the Can Bufí area to the Roman villa of Can Roig and the surrounding orchards.

It is estimated to have been about 3.5 km long and to have conveyed water from several streams. At present only two sections are visible: at Fuente del Hierro and Can Cola, which preserves four arches and part of a fifth one (29.30 metres long).

More stones! But now in the form of a medieval castle, from where they watched and defended these lands. I have known all the owners and lords of this castle: counts, viscounts and dukes.

Would you like to be nobleman as well? Draw yourself in the castle and give it a name.

Medieval fortress of square plant (some wall remains) with a cylindrical tower raised at the centre, at present in ruins.
Outside the walled enclosure there are the ruins of the old castle’s chapel, dedicated to Saint Michael, documented since the 12th century.

The territory dominated by the Lord of Montpalau Castle extended from Arenys to Hortsavinyà. It was not, however, the permanent residence of the lord; it had a surveillance and defensive function and rather served to intimidate the peasantry.

Its origins are found in a document dated 1089 in which it was mentioned for the first time and belonged to the Count of Barcelona, but changed owners throughout the centuries, despite all being nobles:

An inscription at the entrance of Pineda de Mar’s Church refers to the cruel attack suffered by the population on August 1, 1545, by Turkish pirates led by the famous Dragut.

“On August 1 of MDLV, at dawn, XI Turkish galleons sent people to the beach; they burned the church doors and many houses, and killed and captured LXX souls climbing up to Palau’s house. By noon they were back on board. For the sake of the villages this Pineda church has been fortified.” 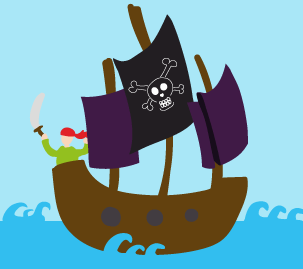 Pau Gibert (Pineda – Barcelona, 1782) was a bandit known by the nickname of the Seaman who sowed terror in the regions between Barcelona and the French border, stealing from farmhouses and travellers.

He was introduced into the world of banditry by his uncle and had a gang formed by Escabeiat, Cua Llarga, Musicot and Poca Roba

In 1779, he was already considered a public danger and was imprisoned twice, from which he escaped in both occasions. Finally, he and his gang were captured in 1782 by a group of 17 smugglers that earned a £300 prize. The same year he was sentenced to death. Once the sentence was carried out, Pau Gibert’s head and right hand were exposed on the street for a few days, locked inside a cage tied to the top of a post.

Are you not a tourist? Well, they’ve dedicated a museum to you, so let´s go!

Look, touch, play, explore … Travel is to discover: Discover the museum in a different and fun way with family and theatrical visits.

The legend of the Llopa de Calella is about dogs and wolves. Find out more!

The Museum of Tourism (MUTUR)

A museum concept that is unique in the world. A tribute to tourism with the aim of showing in an attractive, didactic and participative way the history of tourism and its socio-cultural and economic effects globally

A walk through the history of tourism (from the routes of the first travellers and explorers to the sector’s present day); an emotional approach to what travel represents in regards to the discovery of new ways of doing and thinking and the personal enrichment that travel entails.

It also tries to portray tourism as an economic engine, as a showcase of culture and each one that belongs to it and as a vindicator of social and cultural heritage. It also wants to be a space for research and dissemination of educational and pedagogical proposals for the promotion of tourism culture.

The Legend of the “Llopa de Calella” (The Wolf of Calella)

The figure of La Llopa that participates in the correfoc (“fire-runs”) of the town’s patron saint festival originated in a local legend from the first half of the twentieth century that satirizes the inhabitants of Calella:

One day, an exhilarated Quico of Can Urrel-li explained to people sitting in the tavern that he had seen a wolf coming down Can Comas stream. After a few days, he saw another two wolves. Alarmed, the town decided to organise an expedition made up of peasants, volunteers and a few somatenes (local police) to drive the beasts away. In the middle of a potato field they found the two animals sunbathing. They shot them down, killing one and causing the other one to escape. The poor dead animal was exposed on the porch of the mayor’s garden so that the whole town could go and see it.

A lady who lived on a farm between Sant Pol de Mar and Calella was desperate because she had lost one of her wolf dogs that guarded her property. When the landlord explained to her that a wolf had died in Calella, the woman feared the worst. Indeed, her dog Lea had died.

Since then, every time people from the surrounding villages talk about people from Calella, they exclaim “Calella, La Llopa!”

Walk through this park and find the element of surprise: a shelter from the Civil War (1937) with four long galleries that protected the population from aerial bombardments.

Let me explain a little more: on July 18, 1936, some military men wanted to end the Government of the Republic by force and provoked the Spanish Civil War (1936-1939). The Francoist army attacked cities and towns with planes that dropped bombs on people. To protect themselves, thousands of air-raid shelters, like this one, and machine gun bunkers were built in Catalonia.

This is the only one left, but how many shelters were built in Colella during the war?

Take a photo of yourself to prove you have found it.

To situate ourselves, we go to this splendid viewpoint, from where we can see Calella, the coast and even the mountains of the Natural Park of Montnegre and Corredor.

Do you know how they used to talk to each other? Neither through mobile phones nor the Internet: with towers like these they communicated from Montjuïc to La Jonquera. There were many of them, this one was number 214!

The communication by optical telegraphy was done by putting some rods in different positions, which meant numbers and letters. One tower would send a message and would then repeat it to the next tower.