From here I have a perfect view of the Milky Way.

If you don’t know what it is, take your time to visit this observatory, which has a 43 cm diameter telescope!

It is in an area that, far from other places with too much light, enjoys a dark sky ideal for astronomical observation.

Would you like to look at the stars through a telescope? Check out the children’s activities on the web.

The tram, what a great invention! Because going with a tartana (horse-drawn carriage) was a little heavy and slow…

In 1916, after the road had been built and electricity had reached the village, the tramway could be initiated. It linked Tiana with the Montgat train station, making it easier for workers to travel to the factories in Montgat and Badalona,

Do you know for how many years it was in operation?

Tiana is not the only town with a tramway. Argentona and Mataró also have one.

Tiana already had motorway since 1907 and in 1913 electricity was connected, so electric lighting was set up, replacing the old oil lanterns that since 1882 dimly illuminated its streets.

With roads and electricity in Tiana, Mayor Joan Garí was able to carry out an ambitious project: a tram linking Tiana with Montgat station. The tram was inaugurated in 1916 and Joan Garí was named Tiana’s favourite son.

The tram allowed workers to travel to work to the factories of Montgat and Badalona. The residents of Tiana saw their communications improved and their properties revalued when Tiana improved its link with Montgat and Barcelona.

The arrival of the tram meant the immediate disappearance of Lo Peral wagon, a carriage pulled by horses, which for many years had performed the same function.

After almost forty years of service the tram disappeared definitively, and remained in the memory of all the inhabitants of Tiana as a strong symbol of the town. 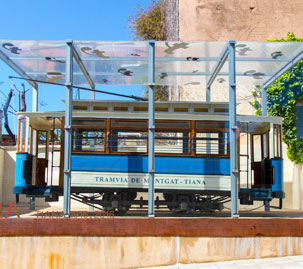 Would you like to know the story of the first train that ran through Spain in 1848? Come to the tunnel, I’ll explain it to you:

Miquel Biada i Buñuelo was an inhabitant of Mataró who emigrated to Venezuela and Cuba where he lived the inauguration of the railway line, a fact that motivated him to do the same from Barcelona to Mataró. That’s why the Montgat hill was drilled and this is the first train tunnel in history!

The fish auction in Montgat is sung, as they traditionally used to do, and it is the last one left in Catalonia.
Come to the fish loge of Montgat from Monday to Friday, at 13h, and live a unique experience: buy fresh fish directly from the fishermen.

In addition to having magnificent panoramic views, this esplanade also features the remains of the cannons of the old coastal artillery batteries, silent witnesses of the Civil War.