Let’s walk! Or do you prefer to go cycling? The route of the Tourdera is a route that follows the course of the Tordera river and the river of Arbúcies, from the Montseny to the beaches and passes through these municipalities of the Maresme. What part shall we do today?

Green area for walking and playing. It has a small stage, children’s swings, sports facilities and the central pillar of the old iron bridge that used to cross the river.

What is this part of a bridge doing in the park? Invent a story that explains it.

Find the sardana figure (Catalan folk dance) and dance with them.

The Statute of the Sardana School was erected to celebrate Nuestra Danza Association’s 25th anniversary (2001).

Sardana is a popular Catalan dance and the national dance of Catalonia.

In the park there is also the central pillar of the old iron bridge that crossed the river, which collapsed on April 5, 1969. 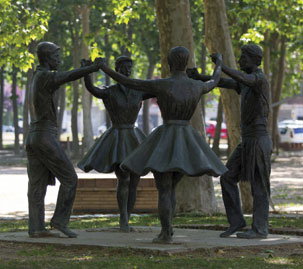 Go up and see for yourself why they built it here: from a bird’s-eye view you can see the sea and the mountains, the Maresme, la Selva and the Vallès.

This castle has a hidden treasure. Legend has it that it can only be taken out of the castle on Christmas Eve, at the stroke of midnight, and that if you have not left the castle walls by the last bell, all the gold you have on you will turn to stone.

You know I love birds, right? Then come with me and see how many there are!

It is a lagoon isolated from the sea, an area of natural interest for many migratory birds that use it as a resting place to take shelter.

Take a picture of a bird and give it a name.

It is a magical and unique park, full of giant figures and dolls, playful spaces for all ages: skateboarding area, areas for sensory games, balance, shelter…

Find the giant cake and say what it is.

Take a crazy picture of yourself with the sculpture you liked best.

Have you noticed the rock in the middle of the sea? They are the remains of the Pilona, where the wagons loaded with iron from the mines of Malgrat arrived, hanging from cables, to load it directly into the boats.

Today a mine bat will accompany me. It’s called like that because it lives in the caves where the mines used to be. Want to know more about it?

How far did the wagons travel from the mines to the Pilona?

The Malgrat Hiking Group recovered an element from the bottom of the sea where the ships anchored. Try to find it!

La Pilona and the mines

La Pilona is a symbol of Malgrat de Mar because it is the most important remnant of the town’s mining period.

In 1909 an important French mining company founded the Malgrat Iron Mine Company, which invested a lot of capital to solve the problems of transportation of iron from the mines to the harbour to be loaded on ships.

The solution was to build a cable air transport system supported by a metallic tower structure, by means of which iron-loaded wagons travelled about 1.5 km from the mines to the loading station known as La Pilona, a platform 450 m. away from the seaside, from where the material was poured directly into the ship holds.

La Pilona was a solid base that supported an elongated platform equipped with pulleys and where the cables turned their way back.

There were about 270 miners, many of them coming from the region of Murcia (a village called Ramonete, in particular), from where they emigrated massively to come to work in the mine.  When a ship arrived, about 4 or 5 men were assigned to the aerial loading station and another 8 did to La Pilona platform to empty the wagons.

When World War I broke out in 1914, the mines were permanently closed after having made a total of 21 shipments. 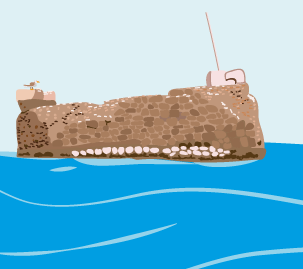 The bats from the mines

The caves of Can Palomeres mines are one of the most important shelters for bats, as you one can distinguish up to 19 different species.

For this reason, this area belongs to Natura 2000, a network of nature protection areas in the territory of the European Union and is also part of the Western Mediterranean Eco-epidemiological Network, which also has among its members internationally renowned institutions such as the Pasteur Institute in Paris.

Mine bats coexist normally with the population and can be seen flying through the streets of the village on summer nights.  In fact, they are very good allies for controlling insects like the tiger mosquito. 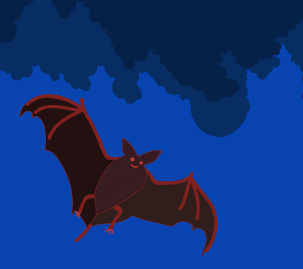